In this Review & Test we will report about our Mitrade experiences. We will go into the most important aspects and also offer the possibility for you to rate and comment

The most important facts about Mitrade

Mitrade was founded in Melbourne in 2018 and has grown to a global player with more than 1.2 million users worldwide. Today, Mitrade offers over 10 languages and operates 4 offices. Due to its exceptional services, Mitrade won more than 8 awards in 2022 alone and also a BrokerCheck Award. Mitrade is regulated by several authorities including ASIC, CIMA & FSC.

The most important facts about Mitrade

What we liked about Mitrade

Most traders will have positive experiences with Mitrade due to its solid trading infrastructure. Trades are executed instantly in less than 0.1 seconds. With more than 420 available trading instruments and low spreads without commissions, Mitrade excels at offering outstanding trading conditions for new and pro traders alike. After counting some numbers, we found that their webtrader offers more than 80 indicators as well as crucial data like forecasts, economic calendars, market data or sentiments, and risk management tools. Beginners will find plenty of learning materials ready to use, and an exclusive trading academy will launch in Q4 2022. Mitrade offers STP and negative balance protection. Overall, Mitrade is a trustworthy broker and highly regulated. Conveniently, traders can choose their desired leverage for each trade and even trade without any leverage.

What we disliked about Mitrade

Like every time, we try to highlight negative aspects about every broker that we review as well. For Mitrade, it is probably that they do not offer thousands of trading instruments. You will not find every possible exotic stock at Mitrade. Similarly, if you are an advanced trader, who already trades with several brokers, you will maybe miss MetaTrader as an available trading platform. Traders that want to hold positions for quite a while, will miss CFD-futures without swap fees. US traders can’t trade with Mitrade.

US traders not allowed

The comparison values are based on data from 15 Forex / CFD brokers. The last survey was conducted in June 2019.

Which trading assets are available at Mitrade

Mitrade offers over 420 different trading instruments. Traders can choose from popular FX pairs like GBP/USD or USD/CAD, or even more exotic options like GBP/DKK or EUR/TRY. US & Australian stocks are available as well.

Among the available instruments are: 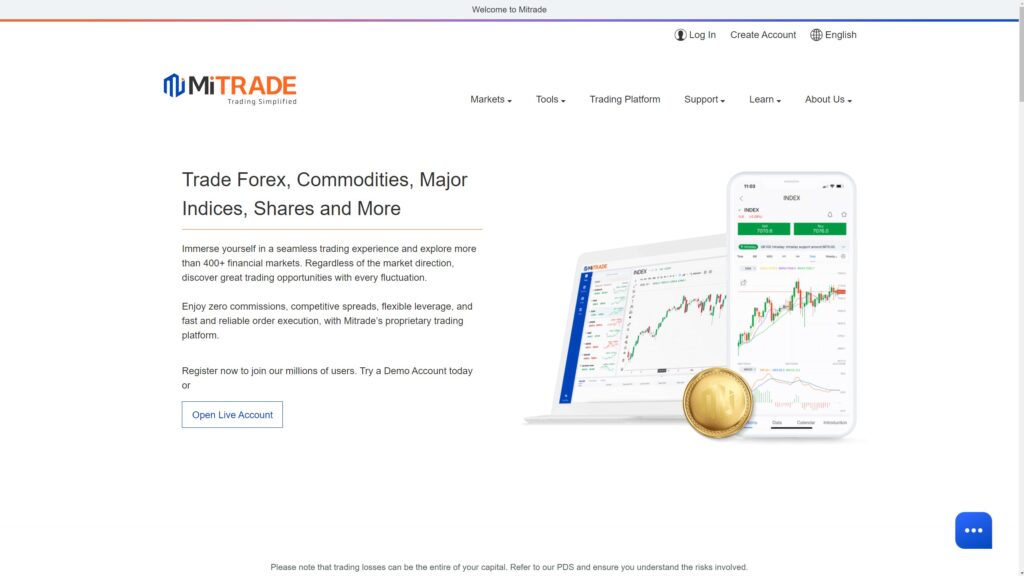 Overall, our Mitrade experiences are positive. Their top-notch proprietary trading platform offers everything every beginner or advanced trader desires. Before placing any trade, you can choose the leverage, including the option to trade without any leverage at all. 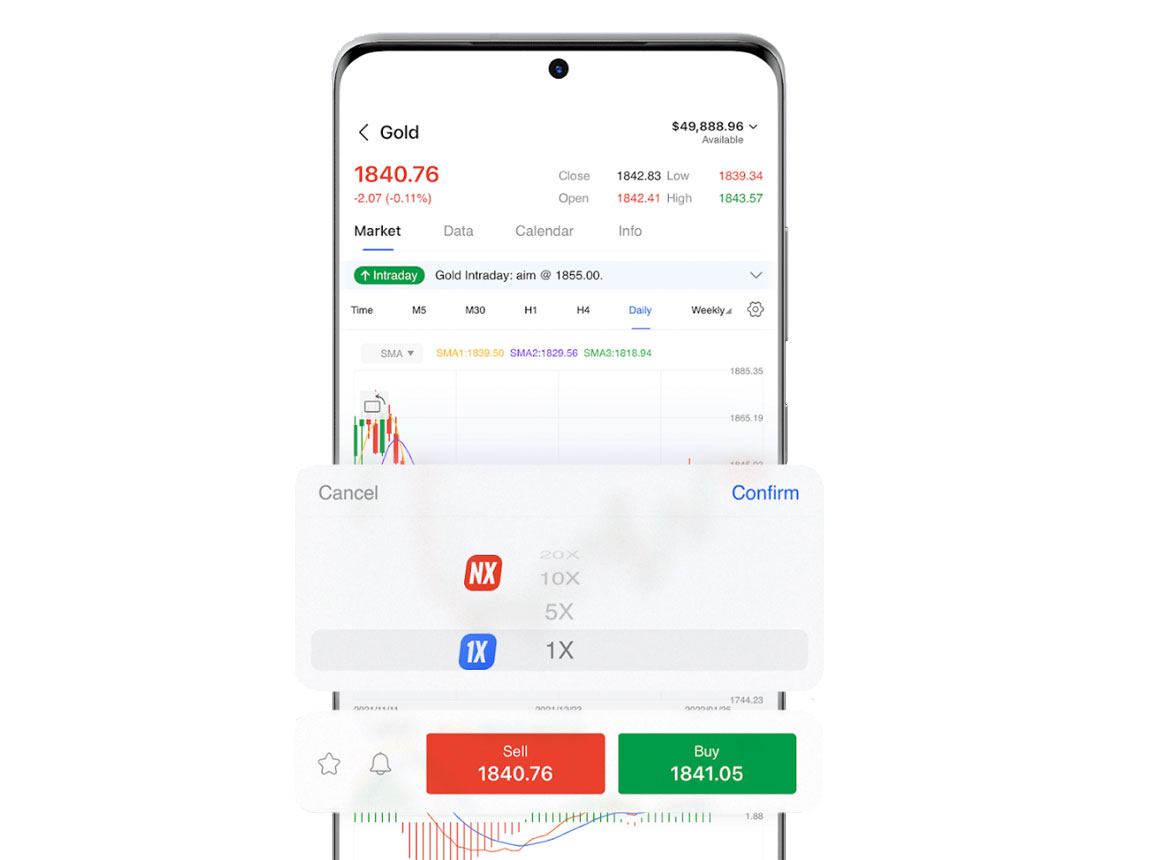 Traders receive up-to-date market insights, trade analytics, sentiment data and risk management tools to improve their trading results. The minimum deposit to start trading with a live account is quite low. Depending on the country, you only need about $50 to $200 to start trading.

The order execution of Mitrade is extremely fast, and most orders are executed under 0.1 seconds. As info for experienced traders, scalping is not allowed, but hedging is. There is no guaranteed stop loss feature, but all accounts are negative balance protected. Spreads are usually below average, which is good for heavy traders. But like with every broker, you should pay attention to the spreads because in volatile markets or at times when liquidity is thin, spreads could get bigger.

The proprietary trading platform is very modern and clear and offers especially for trading beginners an easy entry into the world of trading. Advanced traders will also quickly become familiar with the platform. Only professionals, with their own automated trading software, will not be able to use it if it’s running on MetaTrader, as neither MT4 nor MT5 is currently available at Mitrade.

Due to the exceptional proprietary trading platform of Mitrade, we decided to give Mitrade an award. If you never tried the platform yourself, we can only invite you to test it on a free and risk-free demo account. 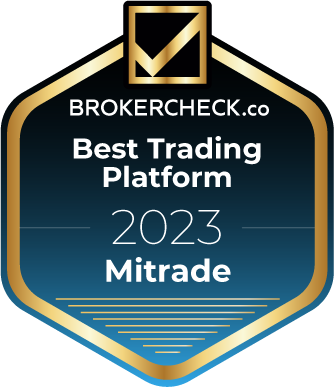 Mitrade has developed a standalone trading platform for web, desktop and mobile. In our experience, it is intuitive for most advanced traders and yet beginner-friendly.  Mitrade has gathered more than 1.2million users for its platforms and thus ironed out problems. You can download the android app or apple version for free, or check out their webtrader. 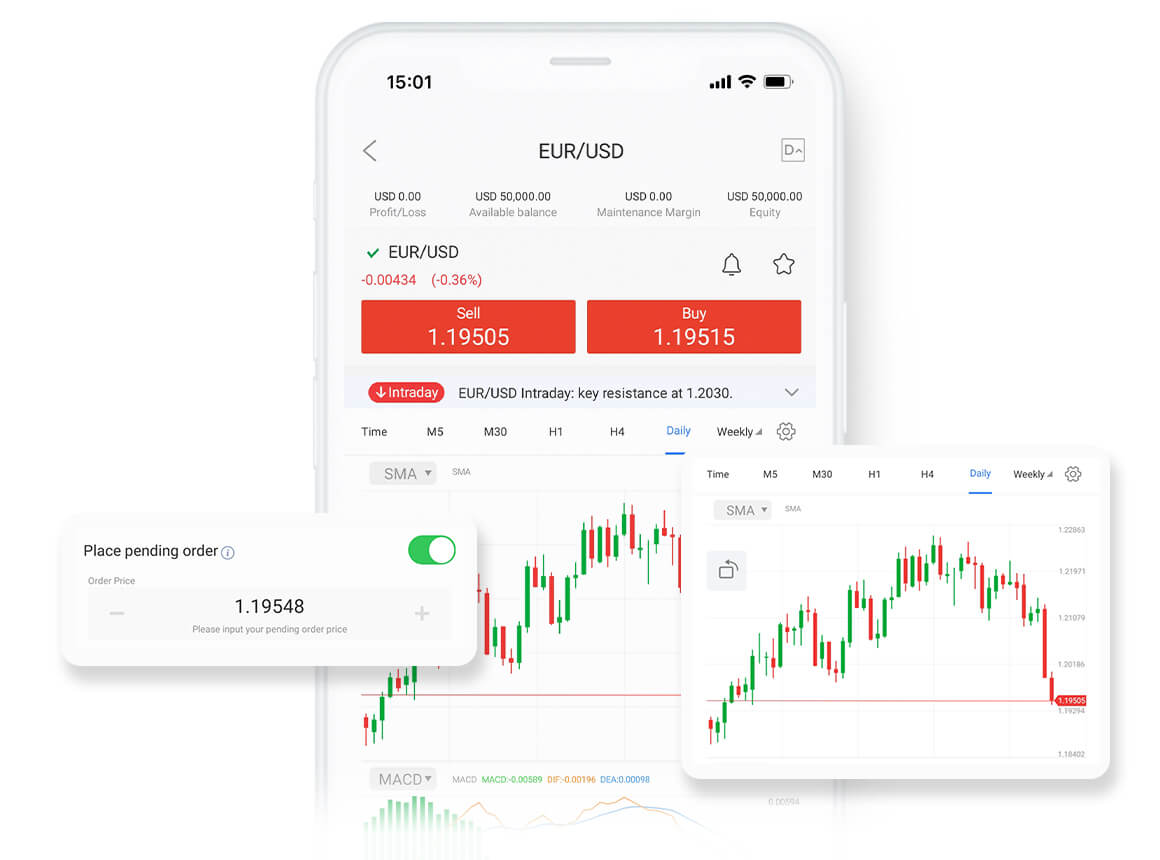 In addition, the Webtrader sorts in categories such as stocks, Forex, indices, cryptocurrencies and commodities. Mitrade’s trading software provides a broad variety of technical indicators despite its simplicity, allowing traders to utilize the platform for advanced technical analysis. The chart is fully customizable.

Open positions or orders can be easily managed. Both the Stop Loss (close on loss) and the Take Profit (close on profit) can be adjusted to manage your risks.

Traders who are looking for new trading ideas or markets can use the provided analysis from trading central. You will find trading ideas or strategies for stocks, currencies and commodities. Especially with stocks, highly volatile trading opportunities can be discovered quickly.

Mitrade only offers a single live account type. There are no tiers for higher deposits, which is a huge plus in our opinion. The Order Execution is instant and your account type is STP. Mitrade does not charge any inactivity fees or similar hidden fees. Traders who wish to try Mitrade first can do so in a free demo account. If you do not verify your account information, your trial account will run out after 30 days.

Client funds are safe with Mitrade.

Although Mitrade offers the same trading conditions for each account size, additional services may be available for clients with large trading volumes.

How are the fees at Mitrade?

The fees are simple at Mitrade. There are generally no commissions or any other charges

Mitrade is financed exclusively through spreads, which usually have only a small premium over market prices. Therefore, the fee structure is quite lean. The spreads of most products are cheaper than those of other brokers. In particular, equity traders will be satisfied with the fees, since no minimum commissions are due.

The overnight interest rates at Mitrade are favourable, as the calculation of the swap fee is only based on the leverage provided and not the entire value of the position.

Deposits and withdrawals at Mitrade

Mitrade does not charge any fees for deposits or withdrawals. All fees incurred by you when transferring money to and from your account are charged by your bank or payment provider.

The following payment methods are available at Mitrade.

How is the service at Mitrade

The service of Mitrade is solid. Support is available 24/5. So, you can also reach someone at 4 am, which is critical for some traders.

Is Mitrade regulated and secure?

Mitrade is a reputable broker that is being regulated by multiple official entities. These include CIMA, ASIC, FSC

Mitrade is a brand jointly used by multiple companies, and it operates through the following companies:

The vast majority of traders will have positive experiences with Mitrade. Due to the modern trading platform, both beginners and advanced traders are in good hands with Mitrade. Once the trading academy launches, beginner traders will be able to improve their trading results dramatically.

By regulation, every new client must go through some basic compliance checks to ensure that you understand the risks of trading and are admitted to trading. When you open an account, you will probably be asked for the following items, so it is good to have them handy: A scanned colour copy of your passport or national ID A utility bill or bank statement from the last six months with your address You will also need to answer a few basic compliance questions to confirm how much trading experience you have. It is therefore best to take at least 10 minutes to complete the account opening process. Although you can explore the demo account immediately, it is important to note that you cannot make any real trading transactions until you have passed compliance, which can take up to several days depending on your situation.

To open an account at Mitrade just press the button below
Open Account at Mitrade
CFDs are complex instruments and involve a high level of risk due to leverage. 70% of of retail investor accounts lose money when trading CFDs with this provider.

We ask you to read our risk notice and disclaimer carefully before making any investment or action. The analyses provided are for information purposes only and cannot replace an individual discussion with a competent person. Liability for direct and indirect consequences of these proposals is therefore excluded. However, the offers that the user finds on the TRADE-REX websites are expressly not directed at persons in countries that prohibit the provision or access to the contents posted therein, in particular not to US persons within the meaning of Regulation S of the US Securities Act of 1933.

There is always a relationship between high returns and high risks. Any type of market or trading speculation that could generate unusually high returns is also exposed to high risk. Only excess funds should be exposed to the risk of trading, and anyone who does not have such funds should not participate in trading leveraged products, futures, CFDs and forex products or the like. Trading foreign exchange and futures or CFDs on margin is associated with an enormous risk of loss and therefore not suitable for every investor! TRADE-REX assumes no responsibility for any losses or profits. CFDs are complex instruments and come with a high risk of losing money rapidly due to leverage. Between 65-90% of retail investor accounts lose money when trading CFDs. You should consider whether you understand how CFDs work and whether you can afford to take the high risk of losing your money.

BrokerCheck is owned by TRADE-REX e.K. and may contain advertising, sponsored content, paid listings, affiliate links or other forms of monetization. BrokerCheck adheres to the standards of word-of-mouth marketing. We believe in an honest, sincere & transparent presentation. The remuneration received may influence the advertising content, topics or contributions on this website. If available, these contents, advertising spaces or contributions are clearly marked as paid or sponsored contents. BrokerCheck uses affiliate links wherever possible. It is safe to assume that when you click on a link it is an affiliate link. If you click on an affiliate link and make a purchase or registration, we may receive a referral fee. The views and opinions expressed on this website are solely those of the authors. If we claim or appear to be experts in a particular subject or product or service area, we will only support products or services that we believe deserve such support because of our expertise. Any product claims, statistics, offers or other representations about a product or service should be discussed with the respective provider.